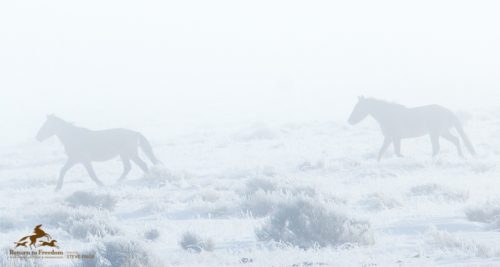 On Saturday, 58 wild horses were captured, including two that were roped and led into the trap. Two others were euthanized, according to the Bureau of Land Management:

Of the wild horses that have died, 12 have been euthanized. A 13th broke its neck while trying to escape. Earlier in the roundup, another wild horse also collided with a contractor’s truck well away from the trap site but it has not been found.

On Saturday, trapping began in temperatures of about 10 degrees. Among those captured before the day was done: A family band photographed in its final minutes together (see photos below). Later, the wild horses would be sorted in pens by sex and age and likely separated forever.

The BLM plans to capture about 700 wild horses from the Horse Management Area 50 miles west of Milford, Utah, by Jan. 31.