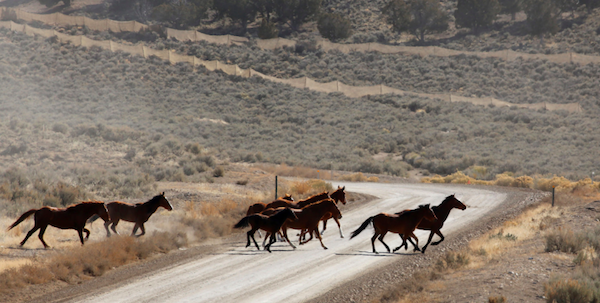 Horses cross a road as they head to the entrance of the BLM Nevada Triple B Complex Gather trap site on February 2, 2018. BLM photo.

The Bureau of Land Management captured 55 wild horses on Tuesday, Feb.13,  during the 14th day of the helicopter drive trapping at the Triple B Complex in Nevada, according to the agency.

The 55 wild horses captured include 24 mares, 19 studs, and 12 foals. Two horses were euthanized due to what the agency identified as pre-existing conditions. As of now, the cumulative total of wild horses captured during the Triple B Complex helicopter roundup is 817.

As of now 28 mares who have been treated with PZP, along with one mare who did not receive the treatment, were released back into the HMAs. Furthermore, 27 studs joined the mares in returning to the HMAs.

The horses selected will be prepared for adoption at the Palomino Valley Wild Horses and Burros Adoption Center.