TV report: What does Trump presidency mean for wild horses? 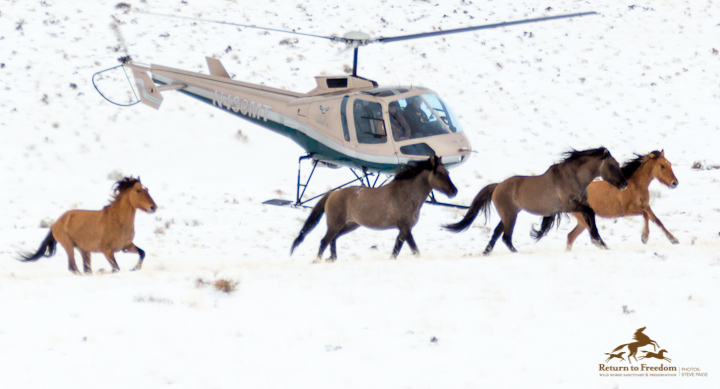 This KGO-TV report features roundup footage shot by Return to Freedom humane observer Steve Paige. Please consider a contribution to the Wild Horse Defense Fund, which makes it possible for Return to Freedom to have humane observers on the ground at roundups. Having an active voice has proven valuable for holding BLM and contractors accountable for the humane handling of wild horses, pressing for improvements to humane standards, and educating policymakers and the public about how tax dollars are being used.

As published by KGO-TV

It’s been a problem for decades. Some ranchers have been able to ignore the law and the government’s policy, purchasing wild horses and sending them to slaughter for food.

Month by month, year after year, this is how the federal government tries to maintain a healthy wild horse population — using helicopters to scare herds to stampede, so they can capture what they believe are excess mustangs.

BLM Spokesman Jeff Fontana tells the I-Team, “It’s all about establishing populations that the range land can support.”

But the round-ups often kill or injure horses.

During the Owyhee round-up in Nevada two months ago, the Bureau of Land Management or BLM reports on its website 18 horses died. But public records show many more died — a total of 48 — in the round-up or in government corrals after: broken necks or backs, leg or pelvis fractures, some causes of death listed as “unknown”, others as “pre-existing conditions”.

“I’ve seen foals that have died because they have literally run their feet off,” says Ellie Phipps Price.

She tells Dan Noyes, the BLM allows many more cattle and sheep owned by private ranchers to graze on public land, compared to wild horses.

“The herd sizes are so small in some places, they’re not genetically viable,” says Phipps Price. “So we are at risk of losing these amazing, iconic animals.”

Phipps-Price cites a National Academy of Sciences study from 2013 that criticized the government, saying:

— that there’s “a lack of evidence that management decisions are informed by science.”

— It urged the BLM to use “contraceptives or chemical vasectomies … to reduce the growth rate.”

Phipps Price tells Dan Noyes, “If they embrace birth control, they would be able to manage populations humanely.”

But, the government currently spends less than one-percent of its wild horse budget on fertility control.

$50 million a year, about 65-percent of the budget, goes to storing 44-thousand wild horses in facilities like this one near Susanville where they’re up for adoption.

They’re fed every day — a far different life than freedom on the range where they sometimes run up to 30 miles a day.

Dan Noyes asked, “Normally, how high would the horses go, the wild horses go up that mountain?”

Jeff Fontana answered, “During the summer, they’d be up the top of that mountain.”

Now, wild horse advocates are worried a Trump presidency could bring a dangerous change for the mustangs.

Congressman Zinke from Montana is the president’s nominee to head the Interior Department, overseeing the BLM and the wild horse program. As a state lawmaker in 2009, Zinke promoted a bill to kill horses for food.

He testified in Montana 2009, “It’s a slaughter house for horses that are either abandoned or old or broke from the livestock point of view.”

The I-Team asked if Zinke would now favor slaughtering wild horses held in government corrals. His office said Zinke would not comment during his transition to interior secretary.

Dan Noyes reported in 1989 for World News Tonight, “With the flick of a finger, another wild horse is on its way to the meat packer. … Thousands each year wind up in slaughterhouses, to be exported for human consumption in countries like France where horse meat is popular.”

Now, the Trump administration tells Dan Noyes, they have “no plan to move forward” with that. “We are evaluating the best path forward for the health and well-being of the federal horse and burro herd and will follow the highest ethical standards consistent with federal law.”

Phipps Price tells the I-Team, “And what I don’t want to see is for them to just throw up their hands and say, ‘Well, we have made a mess of it, so now we’ll just have to slaughter the horses in holding.'”

Dan Noyes told the BLM, “We’ve been doing the same things for decades and it hasn’t gotten better.”

Jeff Fontana answered, “Well, I certainly don’t have the answer, but there’s a lot of people working on answers to the problem.”

You can adopt a wild horse for only $125, but of course, caring for one will cost much more over the years. Adoptions are way down from what they once were, making this problem all the more pressing.