Then and Now: The 51st Anniversary of the Wild and Free-Roaming Horses and Burros Act 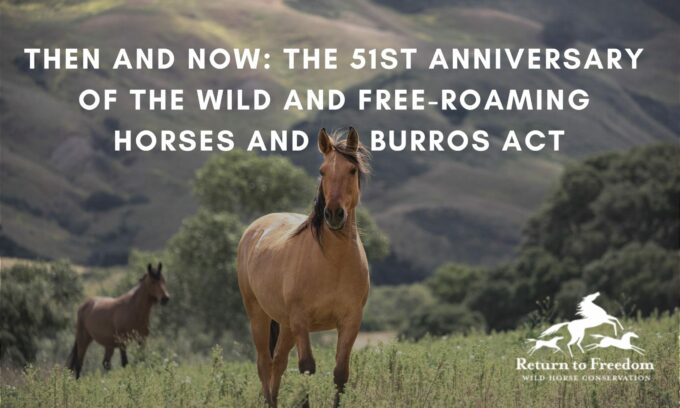 Image taken by Meg Frederick at Return to Freedom

Today, Dec. 15, marks the 51st anniversary of the Wild and Free-Roaming Horses and Burros Act. The Act was signed into law by President Nixon on Dec. 15, 1971, thanks to the efforts of activists like Wild Horse Annie who fought hard for America’s horses and burros. Her determination combined with an outpouring of public support led Congress to pass the bill unanimously. She advocated for the horses during a time when populations had fallen to an estimated 17,000 due to killing on the range and capture for slaughter.

The agencies’ task was complicated by a requirement that they manage public lands for other “multiple uses” (under the 1976 Federal Land Policy and Management Act), a balancing act that also includes private livestock grazing, energy projects and recreation, as well as other wildlife and their habitats.

Congress has repeatedly amended the Act. These change allow BLM and USFS to use helicopters and motor vehicles to round up and transport horses, the adoption of wild horses and burros to private parties, and the sale without limitation of animals aged 10 years or older or passed over three times for adoption. Over time, millions of acres have also been taken out of wild horse and burro use.

Fast forward 51 years: An estimated 82,000 wild horses still live on public lands managed by the BLM, but another 64,000 captured horses are being warehoused in off-range holding facilities.

Adoptions were implemented to reduce the number of horses in holding and the associated cost of housing them off-range, but demand has failed to keep up removal numbers. In March 2019, the BLM set out to increase adoptions by launching its Adoption Incentive Program (AIP). The program gives adopters $1,000 for adopting a wild horse or burro. Though BLM has made some changes in the program in response to opposition by Return to Freedom and other advocates, reports persist that individuals are adopting horses, holding them for a year, collecting the incentive, then selling horses at auctions where known kill buyers are waiting.

You can tell Congress to to end the AIP program here: https://returntofreedom.salsalabs.org/adoption_program2021/index.html

The core of the problem facing America’s wild horses and burros is the failure of government agencies to address reproduction. Their program of capture-and-removal has failed wild horses, burros and the American people who called for their protection. This mismanagement has placed tens of thousands of wild horses in overcrowded holding facilities at ever-growing taxpayer expense as well as at risk of being shipped to slaughter after failed adoptions via the controversial incentive program and the sale authority program.

For more than two decades, RTF has called for implementing safe, proven, humane and reversible fertility control to slow – not stop – herd growth to phase out wild horse and burro roundups. BLM has begun using fertility control, but despite increases in federal funding it has chosen to do so in numbers too small to make a difference. If implemented correctly, fertility control would allow for management of viable herds on the range, where they belong, and save taxpayer dollars over time.

The 1971 Act remains a touchstone for a growing number of people not just in the United States, but around the world who are emotionally invested in the wild horse issue. While the Act has largely been gutted, its intent — ensuring wild herds remain on our public lands — has not been erased from law. The fight for a sustainable future for America’s wild horses and burros continues.

Please join us in calling for the immediate use of safe, proven and humane fertility control that can end wild horse roundups: Send a letter to Congress.