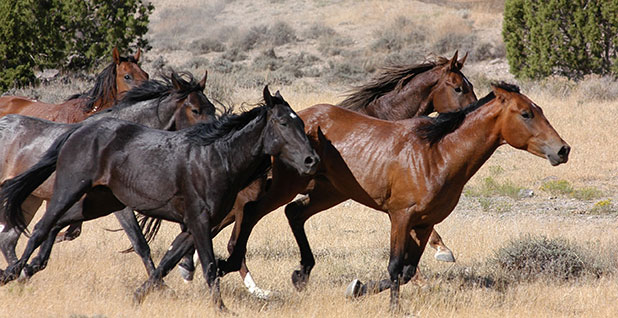 Return to Freedom strongly opposes any attempt by the Bureau of Land Management to limit the public’s ability to comment on, challenge, or be present during the capture and removal of federally protected wild horses and burros. We are disappointed to see the agency take a misguided step that will further undermine public trust and proper oversight.

BLM must now alert the public of a roundup decision 14 days before the actual wild horse “gather” begins, down from its previous lead time of 31 and 76 days, according to an instruction memo the agency issued to all bureau field offices except Alaska.

The original, longer deadline to announce decisions was designed “to allow opponents of the gather decision to pursue an administrative challenge before going to Federal Court,” the memo said.

But that wasn’t happening.

Instead, groups opposed to the roundups have been going “directly to federal court the day before or during a gather” to ask for temporary restraining orders or preliminary injunctions to stop the agency, BLM said in the memo. “Thus, the 31-76 day lead time did not achieve the intended purpose and furthermore, impeded management capabilities by reducing decision-making flexibility,” the memo said.

The new policy is part of ongoing efforts by the bureau to whittle down growing wild horse and burro herds that are trampling federal rangelands. BLM estimates there are more than 82,000 animals roaming 27 million acres of federal rangeland — three times the number of animals the range can sustain without causing damage to vegetation, soils and other resources.

BLM has been trying for decades to reduce the number of wild horses and burros to the so-called appropriate management level of about 26,715 animals, but has been unable to do so.

The new, permanent policy took effect when issued March 15. BLM amended a section of its “Wild Horse and Burro Management Handbook” to shorten the decision issuance deadline. But it also said the agency should give the public at least 30 days to review the environmental assessment of any proposed roundup.

BLM representatives could not be reached for comment on this story before publication.

The American Wild Horse Campaign said in an emailed statement to E&E News that the shortened time frames are part of the Trump administration’s “overall effort to accelerate the removal of wild horses and burros for commercial interest.”

The result, the group argued, is that it will hamper “the ability of the public to participate and challenge BLM decisions that are often unjustified and made on shaky legal grounds. But this is more than about legal challenges. By shortening the window of public notice, this new restriction is yet another avenue for the BLM to stifle public observation of inhumane helicopter roundups on our remote public lands.”

Wild horse and burro roundups, Lane said, “are often in response to dire, overpopulated conditions on the ground — in other words, emergencies.”

He added: “This [memo] speaks to the additional burden that activist litigation places on already fraught circumstances. We simply cannot demand that the BLM manage these animals and then take away the very tools needed for success.”

Litigation has played an ongoing role in BLM efforts to manage wild horses and burros.

The bureau last year withdrew from a project to test a permanent sterilization technique after a federal judge in Oregon issued a preliminary injunction against the research in response to a lawsuit from advocacy groups (Greenwire, Nov. 5, 2018).

And last week, BLM revoked an internal policy that increased the number of animals any individual or group could buy after animal rights advocates expressed concerns it could lead to horses being transported to slaughterhouses in Canada and Mexico. BLM conceded in a statement that rescinding the policy “better ensures that all restrictions and safeguards to protect animal welfare are followed” (Greenwire, March 15).

BLM continues to search for answers.

The bureau this month formally implemented an adoption incentive program that offers $1,000 to those who formally adopt a wild horse that has been rounded up and is being held in an off-site corral or holding pen (E&E News PM, March 12).