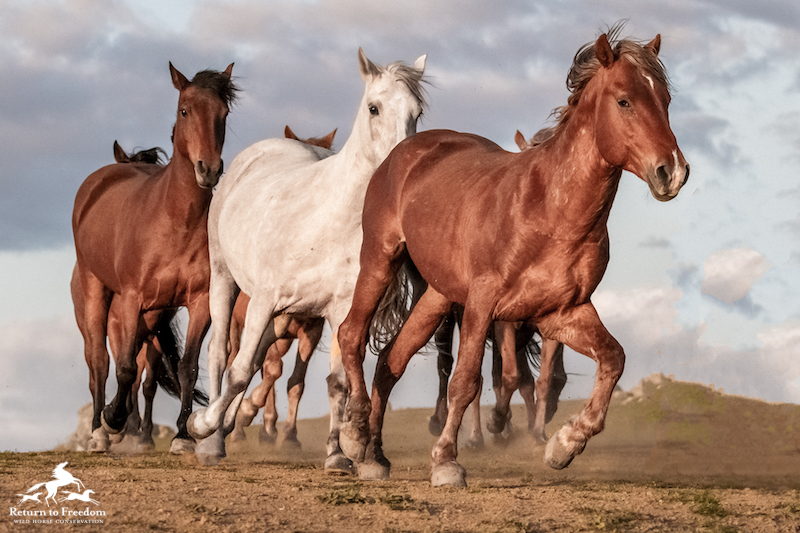 LOMPOC, CALIFORNIA — Return to Freedom Wild Horse Conservation on Thursday applauded the Bureau of Land Management’s decision to award an estimated $500,000 in grants to public and private partners for the benefit of wild horses and burros, even as RTF continues to stress the need for the agency to overhaul the way that herds are managed on our public lands and remains vigilant in its fight for a fairer interpretation of multiple-use and allocation of grazing and water for wild equines.

“Return to Freedom is pleased to see the agency formally and publicly addressing a much-needed culture shift to embrace broader public-private partnerships and engagement,” said Neda DeMayo, president of RTF, a national nonprofit wild horse and burro advocacy organization. “RTF and our colleagues have been diligent and in consistent dialogue with other public land stakeholders, legislators and government agencies with regard to much-needed programmatic changes to the Wild Horse and Burro Program.

“We have remained hopeful that proven safe and humane solutions for wild herds are possible because of many meetings with leaders who have expressed a desire for change.”

For decades, RTF has advocated and lobbied for BLM to replace the tragic and costly capture, removal and warehousing of America’s wild horses and burros with minimally intrusive on-range management, using proven safe and humane fertility control to slow, not stop, reproduction.

While RTF thinks the agency’s population target (called “Appropriate Management Level” or AML) of 26,785 wild horses and burros is arbitrary and low, fertility control needs to be implemented immediately and aggressively to minimize removals — especially now with drought, and the costs of hay and gas making privatizing captured wild horses even more untenable.

In March, the BLM estimated that there were 82,384wild horses and burros on public lands that it manages, with another 58,800 living in off-range corrals or on leased pastures as of July at an ever-greater cost to taxpayers.

RTF has pushed for increased public-private partnerships for projects including range restoration projects to benefit wild horses and all wildlife on the range, well-executed and -documented fertility control projects, and relocation projects that can keep captured horses together with their family bands. All are important at this time.

RTF called upon the agency to be transparent in its decision-making and prioritization of grant funding and share with the public the complete results of such projects so that they can be replicated and improved upon. The BLM announced on Wednesday that it would provide grants in the range of $1,000 to $50,000.

“RTF has remained vigilant and engaged in this dialogue and is cautiously optimistic that change is afoot,” DeMayo said. “Government agencies work slowly, so it is up to us as wild horse advocates and public lands stakeholders to be willing to work together towards changes we can all agree on. When we are polarized, it is harder for legislators to get behind the issue.”