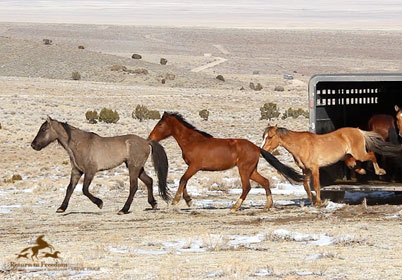 Studs are released onto the range on Tuesday. All photos by Steve Paige for RTF.

Fifty-two more wild horses were released onto the range and 11 others euthanized as the Bureau of Land Management helicopter roundup as the Sulphur Horse Management Area in Utah ended on Tuesday.

Altogether, 655 wild horses were captured starting on Jan. 18, according to the agency.

Of those, 192 older horses were released — less than half as many as BLM said that it would return to the range — including 80 mares treated with the fertility control vaccine PZP-22.

The balance will be permanently separated from their family bands and put up for adoption. Those that are not adopted will be moved to holding facilities, according to BLM.

At least 30 wild horses are know to have died during the roundup, including 29 that were euthanized. A 30th horse broke its neck trying to escape the trap, while a 31st collided with a contractor’s truck on a highway about five miles from the trap site and was not found.

Those euthanized on Tuesday included nine wild horses between the ages of 3 and 10 due to “weak conditions and poor prognosis for improvement,” 4-year-old grulla stud with blindness, and a 4-year-old bay stud with multi-limb lameness.

BLM’s announced goal was to capture about 700 wild horses from the Horse Management Area 50 miles west of Milford, Utah, with plans to put 300 up for adoption while returning 400 to the range.

The Sulphur roundup is part of a BLM plan to reduce the Sulphur HMA’s population to an Appropriate Management Level of 165 wild horses over a six- to 10-year period. In March 2016, the wild horse population on the 265,675-acre HMA was estimated at 957 head.

By comparison, more than 17,000 livestock and 8,300 sheep Animal Unit Months are permitted on allotments that have some portion on the Sulphur HMA. An Animal Unit Month is defined as the amount of forage needed to feed a cow, one horse or five sheep for one month.