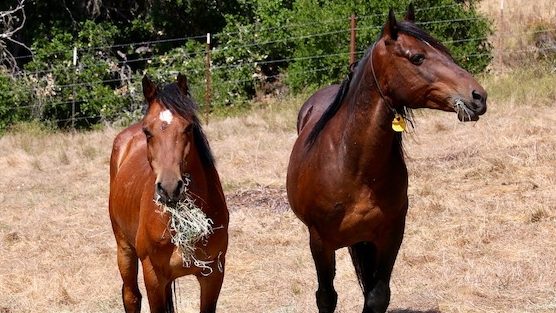 Two geldings from among 10 plus two bonded mares that RTF adopted from Devil’s Garden in 2019. They are shown shortly after their arrival at RTF’s San Luis Obispo, Calif., satellite sanctuary.

The U.S. Forest Service plans to capture and remove another 500 wild horses from Devil’s Garden Plateau Wild Horse Territory, near Alturas, Calif., home to one of the state’s last large herds, starting Sept. 12.

The USFS estimates there are 1,205 adult wild horses on and around the territory — a decrease of 721 from last year’s estimate.

The agency is attempting to reach a USFS-set “Appropriate Management Level” of 260-402 wild horses on the 232,520-acre territory in Northern California, or as low as one horse for every 864 acres. “Reducing population helps address unsustainable impacts on aquatic resources, wildlife, hunting, grazing and other traditional cultural practices,” the agency said in a press release.

By comparison, the USFS permits 26,880 Animal Unit Months of seasonal livestock grazing on the wild horse territory, the equivalent of 2,240 cow-calf pairs annually. One Animal Unit Month is defined as a month’s forage for one horse, one cow / calf pair or five sheep.

Over the past four years, the USFS has captured and removed 2,442 wild horses from the territory (last year, 506 were removed with five wild horses killed during the roundup).

Wild horses from last year’s roundup remain available for adoption at the USFS’s Double Devil Corrals in Alturas. An exact number was not immediately available, but they included mares that were captured while pregnant and have since foaled.

RTF and other advocates sued USFS after the agency announced unprecedented plans just before the 2018 roundup to sell older wild horses captured during without protections against slaughter.  In May 2019, U.S. District Judge James Donato ordered advocates and USFS to engage in settlement talks.

USFS had been seeking to take advantage of a loophole in which Congress had barred BLM from selling horses to slaughter but had not expressly forbidden USFS from doing so. RTF successfully lobbied to have both agencies prevented from selling horses or burros without restriction, starting in the Fiscal Year 2020 budget, as well as from killing healthy wild horses or burros.

In 2017, a federal appeals court ruled in favor of RTF and its co-plaintiffs, ordering the USFS to restore 23,000 acres of Devil’s Garden to wild horse use. The agency had said that the land was added to the territory as the result of an “administrative error” in the 1980s. The court ruled that decades of managing wild horses on the land could not be erased by calling the decision a mistake.

The USFS is allowing just four members of the public per day on Wednesdays through Saturdays, a limitation to which RTF strongly objects, “due to the confined nature of viewing blinds.” In addition, not all trap sites will allow for viewing, according the USFS.

Viewers with reservations should arrive at 225 West Eighth St. in Alturas by 7 a.m., then follow forest personnel to the parking location. Viewers should be prepared to drive in rugged terrain, walk long distances across uneven terrain and possible inclement weather conditions.

Viewers should also be prepared to remain on site until gather operations have concluded for the day. They must bring their own food and water and wear neutral-colored clothing. There are no restrooms at trap sites and often no cell phone coverage. The USFS recommends that viewers bring a folding chair, sunscreen, wide-brimmed hat and sunglasses.