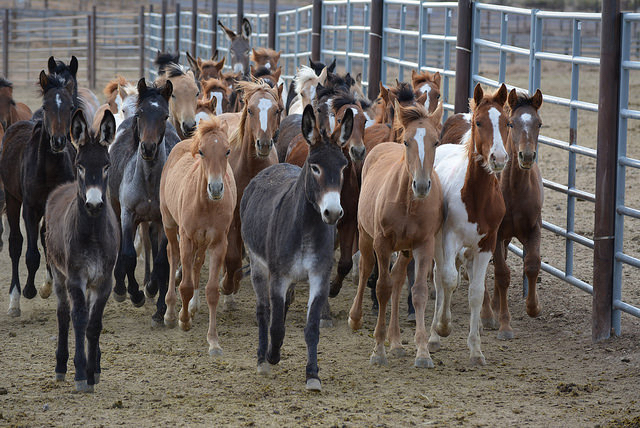 The Bureau of Land Management is accepting public comments on a plan to return about 66 captured wild horses to Warm Springs Herd Management Area after the agency dropped its plan to perform dangerous and costly sterilization surgeries on wild mares.

Only about 30 wild horses and 30 burros remained on the 475,460-acre Herd Management Area after the roundup, according to the agency.

BLM had planned a study of surgical sterilizations on 100 of the captured wild mares, including pregnant mares. The procedure that was to be performed, known as ovariectomy via colpotomy, is seldom used even in sterile environments with domestic horses. It involves removing the ovaries by crushing and pulling them out with a looped-chain medical instrument called an ecraseur.

The agency dropped the study after a federal judge issued a preliminary injunction to stop the surgeries from going forward in November.

Now, BLM has issued a plan to return a portion of the wild horses – just enough to reach the low end of the agency-set “Appropriate Management Level” of 96-178 wild horses and 15-24 burros.

No burros will be returned because the number remaining after the roundup was over low AML, according to the agency.

Half of the wild horses to be returned will be stallions, half mares treated with the fertility control vaccine PZP.

The exact number that will be returned and the timing of the release – likely between June and November — will depend on a number of factors, according to BLM planning documents. These include:

–The number of wild horses counted during a spring 2019 aerial survey.

–When mares captured last fall give birth. According to BLM, 74% of the mares ages 1-over were pregnant at the time that they were captured. BLM plans to return selected mares to the range after their foals reach 4-6 months of age, when they can be weaned from their mare and placed in the adoption program. BLM does not intend to return only mares that were not pregnant at the time of capture, because they might be infertile, according to planning documents.

–Logistics enabling the timing of the release of stallions and mares about one week apart. Because there are an unknown number of mares left on the range after the roundup, a release of skewing the sex ratio toward stallions during the breeding season could put the few remaining mares and their foals at risk of injury while stallions fight to establish dominance.

–Road conditions: Roads onto the HMA are typically passable from May or June through November.

–Wildfires between from June through fall.

Wild horses captured during the roundup were transported to BLM’s Wild Horse Corral Facility in Hines, Ore. Those not returned to the range are to be offered for adoption, sale or transfer to other government agencies.