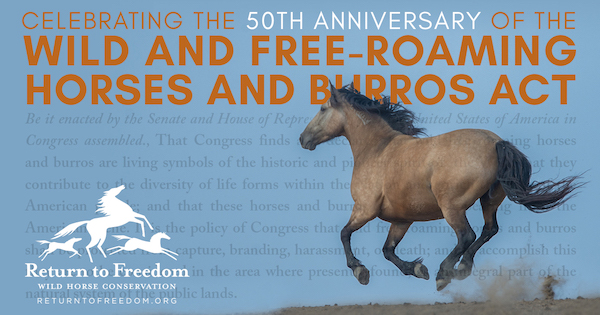 Today, December 15, marks the 50thanniversary of the enactment of the Wild Free-Roaming Horses and Burros Act (Public Law 92-195). The law may well have spared wild horses and burros from vanishing from the Western landscape, but it also placed wild horses and burros at the center of an ongoing struggle for the use of resources on our public lands. As we celebrate the passage of the Act, we’ll take a three-day look for wild horses before it, its passage and what’s come since, and one possible solution for the challenges faced by what the law calls “living symbols of the historic and pioneer spirit of the West.”

Fossil evidence had long supported the idea that horses, once leaving the Americas, evolved into a new species, and so the horses which Spanish explorers brought to the New World were unfamiliar to this land. Advances in molecular genetics have proven otherwise: the horse completed its last adaptation in North America before disappearing, according to Dr. Ross MacPhee, curator at the American Museum of Natural History, who is pursuing ancient DNA research into the origins of the horse.

“Horses were keystone species, as were mammoths, until comparatively recently in Quaternary history. That’s why the mammoth steppe existed,” MacPhee says. “By virtue of their size and habits, horses retain an inherent potentiality to act as keystone species in grassland environments because like other megaherbivores they provide opportunities for other organisms, from microbes to other mammals. The trouble is that they have been excluded by agriculture and other factors from performing this role.”

When the Spanish and then other early European settlers brought horses to this new land, these horses – Equus caballus — were, in fact, returning home. (It should be noted that while most scholars believe there were no wild horses left when the Spanish arrived in the 16thcentury, not all cultures are convinced they completely died out.)

Some of today’s wild horses are direct descendants of those Spanish horses. Others are Indian ponies, cavalry stock, or work horses or others of different breeds that were released or escaped and that have returned to a natural state over the last 200 years and now live on often remote, rugged rangelands.

What happened after the Spanish arrived in the 16thcentury has been called one of the fastest and most widespread introductions (or, in this case, a reintroduction) of a species in the history of the world.

Three centuries later, there were potentially millions of wild horses from Texas to California by some estimates. Others place that figure at several hundred thousand. The most commonly cited figure is 2 million, but even that is a guess. Sections on maps of Texas were simply labeled “wild horses.”

Having subjugated the Native peoples, the Spanish set up a feudal system demanding strict adherence to Catholicism. Native ranch hands were not allowed to ride horses but learned to care for and breed the Spaniards’ weapon of conquest. By the 1650s, the Apaches were regularly running off with horses. In 1680, when the Pueblo revolted, the Spanish retreat left behind more than 3,000 horses. And with that, the age of the Horse Nations began, with horses spreading from tribal nation to tribal nation through warfare and through trade.

The Spanish fueled this growth by importing more animals to replace those lost in raids. By 1790, trappers as far away from the Southwest as Canada reported seeing horses with Spanish brands, according to author David Phillipps.

After the Horse Nations were driven onto reservations and the railroad came to the West, following the Civil War, the Great Plains became a giant pasture. In the 1870s, farmers and ranchers began stringing barbed wire. By 1900, there were 100,000 miles of fence, according to government reports. This helped push horses from Texas and the Great Plains to places like Nevada, where much rangeland remained open.

By the 1880s, trainloads of mustangs were being shipped east to pull streetcars and, soon, be turned into trendy pony coats and baseballs. In places where it wasn’t easy to make money off of them, horses were treated like coyotes and other animals undesirable to ranchers.  Local and state government laws made it open season on wild horses. An 1893 Nevada law allowed horses to be shot on sight – a law only repealed when domestic horses started disappearing.

Wild horse numbers began to shrink. In 1916 alone, Europe bought 350,000 American horses for the war effort, many of them mustangs.

By the 1920s, the automobile and tractor caused the market for horses to collapse. A mustang that fetched $30 before World War I would maybe sell for $1.50 after the war.

In this, some still saw opportunity. Men on horseback would drive upwards of 1,000 horses to railheads and ship them off to glue and chickenfeed factories. The slaughter industry began to decline in the 1930s because most of the horses had been wiped out, according to Phillipps.

In 1934, the federal government created the U.S. Grazing Service, the forerunner to the Bureau of Land Management, and Congress passed the Taylor Grazing Act, which set up a livestock grazing regime across the West. The Grazing Service was staffed with cattlemen who were no fans of wild horses.

By the middle of the 20th Century, wild horses had been hunted, driven off cliffs, poisoned, shipped east as work animals, and sold for slaughter by the trainload.

But they were not quite gone.

Coming tomorrow: Read about the passage of the Wild Free-Roaming Horses and Burros Act and what’s come since.