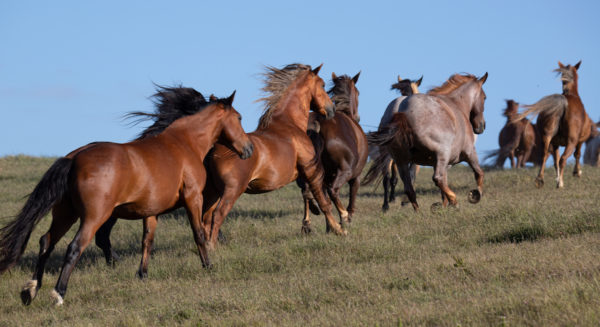 Late on Thursday, the U.S. Senate passed a $1.5 trillion Fiscal Year 2022 omnibus spending bill that includes a $21 million increase for the Bureau of Land Management’s Wild Horse and Burro Program to address what it called “a national crisis.”

Expected to be signed into law on Friday by President Biden, the bill would provide $137 million for the program, including $11 million for “administration of and research on reversible immunocontraceptive fertility control.”

The reality of the BLM’s Wild Horse and Burro Program is that it needs more than funding boosts in one direction of management or another. These set-asides can be helpful if they call out and point the way towards the importance of utilizing fertility control, and this $11 million for fertility control succeeds in doing that.

Return to Freedom supported the set-aside while emphasizing in its lobbying efforts that much more funding must be invested in order to achieve a fertility control program capable of replacing roundups as the agency’s primary management tool.

RTF is concerned that the combined House and Senate Interior Appropriation Committees’ final bill language allows BLM to use the $11 million for research. The agency could use that to further delay implementation of readily available fertility control that is backed by decades of peer-reviewed science showing it to be safe, proven and humane.

We much more strongly supported the Senate’s original language, which said that the $11 million should be used “to implement a robust and humane fertility control strategy of reversible immunocontraceptive vaccines.”

Looking at the Wild Horse and Burro Program both historically and holistically, more than 60% (and even as much as 67%) of the BLM’s program budget has typically gone toward the care of captured horses in off-range holding. That has left little else for range management, restoration, personnel, and administration, let alone fertility control.

To ensure the budget is robust enough to handle all of the necessities of a complex program, including shifting it into an entirely new direction — toward fertility control and away from removals — a larger overall budget was needed. RTF has been heavily involved in this complicated effort.

From FY 2014-2019, the program’s budget allocations remained largely flat at between $75 million to $80 million. For FY 2020, because of the diverse stakeholder efforts RTF has been a core part of since their inception, we were successful in adding $21 million, followed by a $14 million increase in FY 2021, and now $21 million increase for FY 2022. This is the only thing that enables the BLM to even have the money to set aside for fertility control.

It is Congress that must hold BLM’s feet to the fire on immediate, proper implementation of fertility control, however.

Appropriators have been reluctant to micromanage BLM’s program. In FY 2020, for the first time, they began providing additional funding and calling for (if not mandating) safe, proven and humane fertility control use and for relocating captured equines from corrals to more natural and cost-effective pastures, another area in which BLM has fallen short. Appropriators also began requiring for the first time that BLM uphold its own set of humane handling standards.

The omnibus also calls for the creation within 90 days of the bill becoming law, a multi-agency task force to address wild horse management and to include the BLM, U.S. Fish and Wildlife Service, U.S. Geological Survey, and any other bureau the [Interior] Secretary deems appropriate. “In subsequent years, task force membership will be expanded to include representatives of the U.S. Department of Agriculture and other agencies with essential skills and expertise,” the bill continues.

This task force is to have monthly meetings to “review performance metrics, monitor outcomes, assess milestone achievements, and address any delays or setbacks to the implementation of the [BLM’s] May 2020 report. The task force should analyze federal investments and determine if any course correction is necessary.”

The House and Senate Interior Appropriations Committees write that “this is a national crisis on our public lands and requires the expertise and resources of various bureaus and agencies; BLM should not shoulder the responsibility alone.”

Problematically, the omnibus continues to refer back to the BLM’s May 2020 report to Congress — a vague and often self-contradictory plan of aggressive roundups with little use of fertility control before reaching the agency’s arbitrarily set “Appropriate Management Level”: its population target for wild horses and burros. This is a continuation of BLM’s failed approach of management by removal of wild horses while failing to address reproduction.

“The Bureau is expected to continue and expand efforts in line with the May 2020 report,” the committees write in their guiding report language.

Population modeling by RTF and other stakeholders has shown that immediately implementing fertility control alongside any removal that BLM conducts is the only way to catch up with and stabilize herd growth so that on-range management can replace removals.

If BLM does not implement fertility control immediately, in a robust way, to slow (not stop) population growth, then the agency will continue to chase and briefly achieve its “Appropriate Management Levels” on some of the 177 Herd Management Areas, only to soon return to remove more wild horses and burros from their home ranges.

This comes with 59,007 captive horses and burros in off-range holding — including 20,097 in overcrowded corrals — as of December.

We much preferred language released in October by the Senate Interior Appropriations Committee calling for BLM to use readily available fertility control now. The committee wrote that, “While research into new fertility control technologies will be helpful in the future, BLM has valuable tools at its disposable today to control wild horse and burro populations humanely. For instance, the Committee is concerned that removals from the range can have the unintended effect of increasing foaling and therefore BLM should ensure that eligible mares are treated if they are to be released after a gather.”

Other elements of the omnibus are more positive for horses. The bill:

–would continue to prohibit BLM from killing healthy equines or selling them without restriction (to slaughter);

–would continue to prohibit the U.S. Department of Agriculture from hiring horsemeat inspectors, effectively banning horse slaughter within the United States;

–would continue to require the BLM to abide by Comprehensive Animal Welfare Program, a set of humane handling protocols;

–emphasizes the need for adequate BLM staffing, the lack of which has caused bottlenecks for approval of legally required environmental documents and contracts needed to implement a more robust fertility control program and the relocation of captured wild horses from corrals to more natural and cost-effective pasturelands.

Take Action: Send a message urging Congress to press BLM on the use of safe, proven and humane fertility control