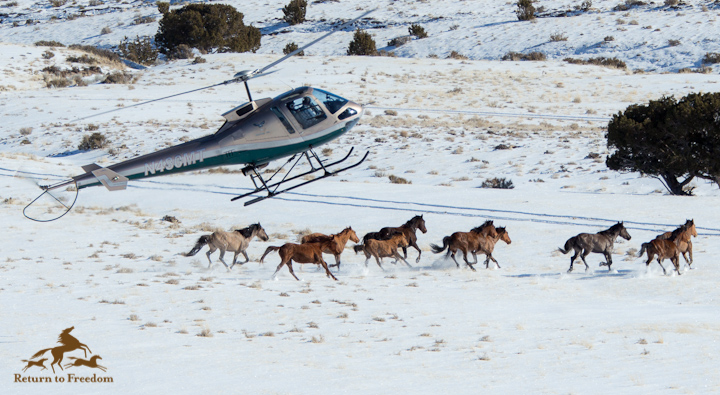 A helicopter pursues wild horses at the Sulphur HMA in 2017. RTF file photo.

Windy conditions grounded the operation on Tuesday. Three horses were killed, however: an 18-year-old dun stud suffered a “[broken] neck after hitting a panel during sorting, a 17-year-old dun stud was put down due to “lame on both front legs with no prognosis of recovery,” and a 7-year-old sorrel stud was put down because he was “blind in his right eye,” according to BLM’s gather report.

A total of 383 wild horses (184 stallions and 199 mares) have been captured were captured during the roundup. A total of eleven wild horses were killed. Eight were put down for “chronic / pre-existing” conditions, including blindness and clubfoot. Three sustained “sudden / acute” injuries, two of them broken necks and one broken leg, all during sorting at the trap site.

TAKE ACTION: Demand transparency and accountability for the humane handling of wild horses and burros.

The BLM set out to capture about 376 wild horses over a period of up to 20 days, removing 326 horses from their home range and treating and releasing about 50 mares with GonaCon fertility control.

Return to Freedom strongly supports the use of reversible fertility control as a tool to halt roundups. However, we will always support the use of PZP over GonaCon. PZP has been studied and proven safe, effective, and humane over the longest period of time and in the greatest number of horses, including, importantly, the greatest number of horses in free-roaming situations.

Before the roundup, the BLM estimated the population of wild horses there at about 600. The agency-set “Appropriate Management Level (AML)” is 165 to 250 wild horses, or as low as one horse for every 1,610 acres.

By comparison, BLM allows up to 26,365 Animal Unit Months of seasonal cattle and sheep grazing in or around the Herd Management Area, the annual equivalent of 2,197 cow-calf pairs (an AUM is defined as the amount of forage needed to sustain one cow and her calf, one horse, or five sheep or goats for a month).

The Sulphur HMA wild horses are among the few herds with Colonial Spanish origins, based on phenotype and blood-typing. Many have distinctive dorsal and leg striping. RTF’s American Wild Horse Sanctuary is home to two family bands of Sulphur Springs horses.

TAKE ACTION: Sign our petition calling for a fair share of resources for wild horses and burros