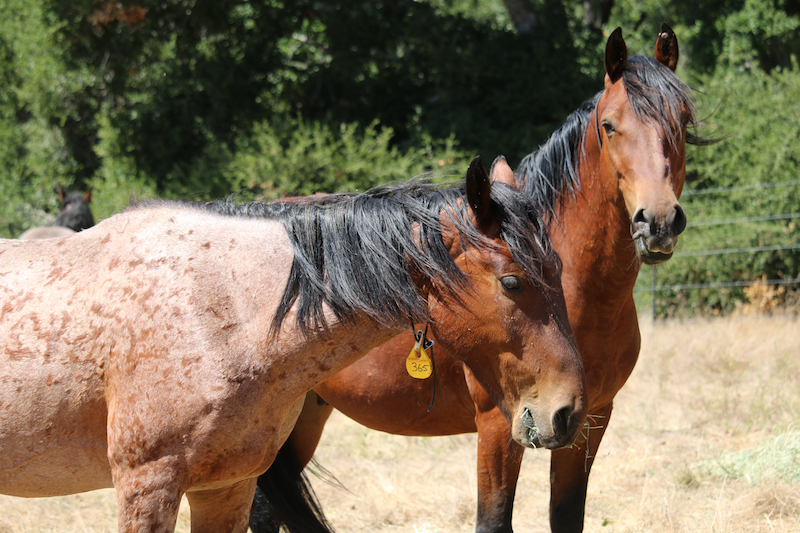 Two of 12 Devil’s Garden wild horses rounded up by the U.S. Forest Service in 2018 photographed shortly after their Aug. 20 arrival at RTF’s American Wild Horse Sanctuary.

Adoptions will begin as soon as Oct. 15 for wild horses captured during the recently completed helicopter roundup at the Devil’s Garden Wild Horse Territory in Northern California.

A total of 499 wild horses were captured and removed from California’s largest remaining wild horse herd. The U.S. Forest Service reported no deaths during the roundup, which ended on Oct. 6.

Those who have approved adoption applications and have made appointments by calling (530) 233-8738 will be able to view and select horses starting Oct. 15.

Others will begin selection by appointment on Nov. 2, with priority based on dates when applications were received by the USFS. Applications and the required pick-up planning form are available at https://go.usa.gov/xQ3r3.

Prior to the roundup, the USFS estimated that there were 1,802 wild horses on Devil’s Garden, which is located at Modoc National Forest. The agency-set “Appropriate Management Level” is 206-402 horses — as low as one horse for every 1,305 acres.

By comparison, USFS permits 26,880 Animal Unit Months of private grazing on the wild horse territory. One Animal Unit Month is defined as a month’s forage for one horse, one cow / calf pair or five sheep. Actual livestock use varied between 63-73% of the permitted maximum from 2006-12, according to USFS planning documents.

USFS did not treat and release any mares with safe, proven and humane fertility control vaccines, which would curb reproduction and calls for future roundups.

About 300 of the wild horses that USFS plans to capture will be kept at the Double Devil Wild Horse Corrals in Alturas, where they will be offered for adoption or sale. The balance will be sent to the Bureau of Land Management’s Litchfield Corrals near Susanville, Calif.

The roundup follows another in fall 2018 during which 932 wild horses were captured and removed from Devil’s Garden.