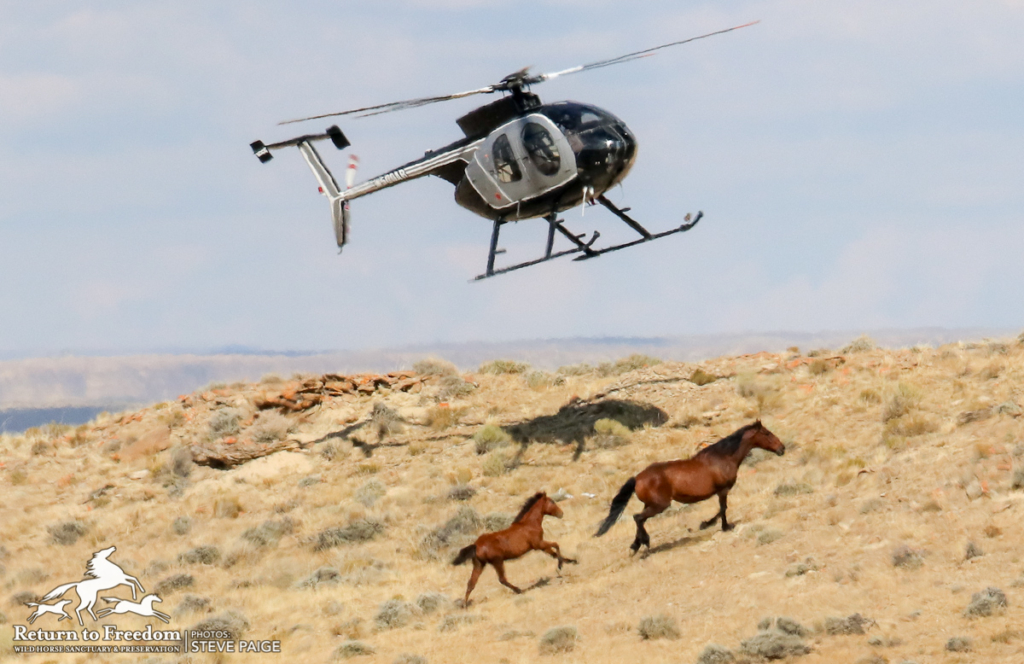 The Bureau of Land Management is leaning toward a plan that would strip more than 2.4 million acres from wild horse use – an 87% reduction – in the Checkerboard region of southern Wyoming,

BLM’s preferred option: Zero out two wild Herd Management Areas, manage the herd on a third HMA as non-reproducing and sharply reduce the number of wild horses on a fourth.

The BLM would also reallocate forage from wild horses to livestock, showing blatant bias against wild horses, and use tools such as the surgical sterilization of mares, which Return to Freedom strongly opposes, and which is not currently an available method for management of wild horses on public lands.

Take action: The BLM is accepting public comments on its draft resource management plan and environmental impact statement until April 30.  To read the full document and submit comments, click here.

The Checkerboard is an unfenced 2 million-acre area east of Rock Springs, Wyo., made up of alternating, one-mile-square blocks of public and private land set up in the 1860s as part of negotiations with the Union Pacific railroad.

The Rock Springs Grazing Association had allowed a number of wild horses to use private land there. Then, in 2010, the ranchers demanded that all wild horses be removed from private land. The grazing association later sued, arguing that BLM had violated the 1971 Wild and Free-Roaming Horses and Burros Act by failing to remove wild horses from public land.

In 2016, the U.S. Court of Appeals for the 10thCircuit sided with Return to Freedom and other wild horse advocates, ruling that a 2014 wild horse roundup on the Checkerboard without going through a full planning process violated both the Wild Free-Roaming Horses and Burros Act and Federal Land Policy Management Act. The appeals court ruled that BLM lacked the authority to treat the entire Checkerboard as private land in its decision to go forward with the roundup.

Now the agency is again attempting to comply with the 2013 consent decree, under which BLM must try to resolve livestock and wild horse conflicts, by amending its guiding resource management plan for the region.

While Return to Freedom understands the complexity of managing wild horses in the Checkerboard, the options that BLM is considering were only those laid out in the consent decree. They do not include other reasonable, humane management actions consistent with the wishes of Congress and the spirit of the 1971 Act.

Furthermore, BLM’s preferred option would set a precedence that a special interest association could request removal of wild horses from private lands in a Checkerboard area with the consequence being wild horses are removed from public lands in that same area.

Federally protected wild horse populations on Western public lands should not be removed due to private landowner pressure.

BLM’s only stated reason for potentially zeroing out two Herd Management Areas while providing no alternative lands for the wild horses is blamed on the difficulty of creating a barrier between public and private lands.

The agency apparently did not consider land swaps or other possible solutions, like scaling up a well-executed program of safe, proven and humane fertility control, an effort that would help lead to stabilization and a decrease, where necessary, of wild horse populations, with less gathers being necessary and less horses ending up in holding facilities.

Specifically, the BLM would:

–change the Salt Wells Creek Herd Management Area to a Herd Area managed for zero horses and conduct roundups any time there are more than 200 horses found there;

–change the Great Divide Basin HMA to an HA managed for zero horses and conduct roundups if there are more than 100 horses found there;

–manage the White Mountain HMA as a non-reproducing herd through techniques that include surgical sterilization of mares, which Return to Freedom strongly opposes, as well as gelding stallions and sex-ratio skewing.

Among RTF’s objections to BLM’s preferred plan of action are:

–The agency’s failure to provide any analysis of the loss of allocated forage and acreage that comes with removing these wild horses;

–BLM demonstrating explicit bias by reallocating forage from wild horses to other wildlife or to livestock without making an equal number of Animal Unit Months available to wild horses elsewhere;

–BLM considering population management tools that are dangerous, inhumane, unproven, costly (surgical sterilization of mares), ineffective (sex-ratio skewing) or that do not have a fully understood effect on wild herds (gelding). Return to Freedom has long advocated for the use of safe, proven and humane fertility control to slow, not stop, reproduction.